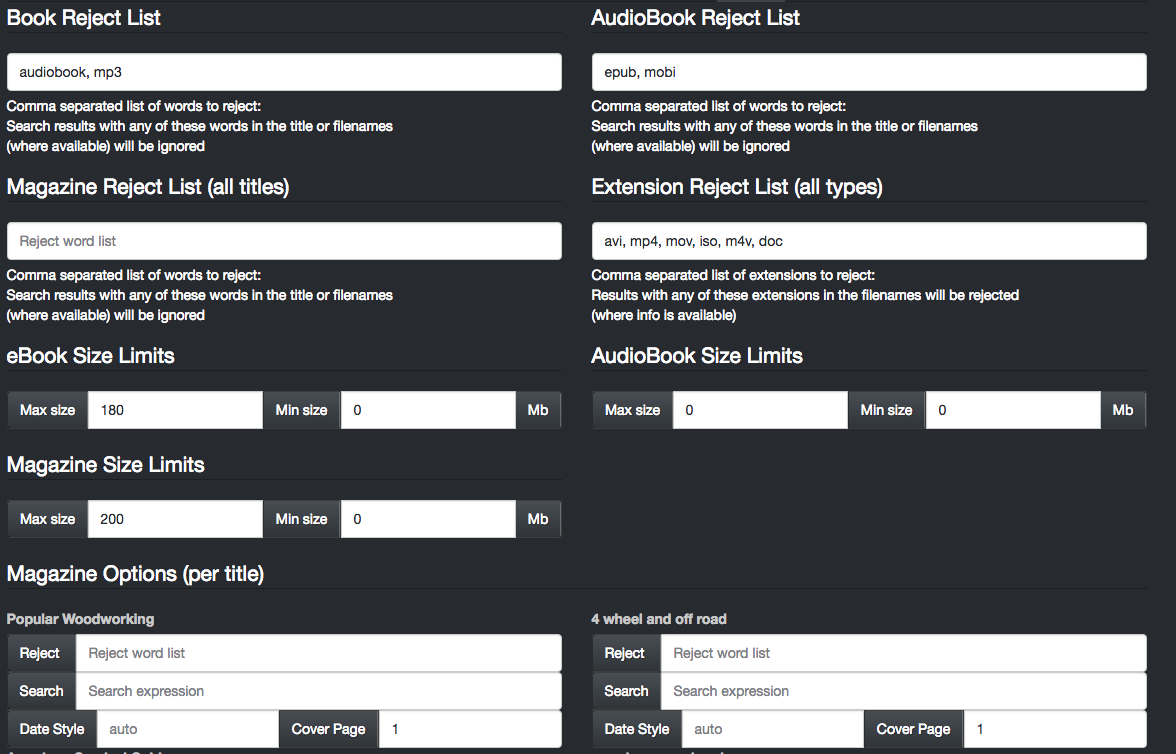 Results with any of these extensions anywhere in the contents will be rejected. Useful to stop badly named video files being grabbed when you want the book. We scan the list of files in the torrent (only transmission/deluge/qbittorrent) and reject the whole download if it contains a file with a matching extension. Can't do this for usenet, as there doesn't seem to be a nzb contents list?

You can restrict downloads by minimum/maximum size (where available). Ebooks are generally way smaller than audiobooks, which helps limit grabbing the wrong type.

You can restrict downloads by minimum/maximum size (where available). AudioBooks are generally way bigger than eBooks, which helps limit grabbing the wrong type.

You can restrict downloads by minimum/maximum size (where available).

Each magazine has it's own reject list. Useful where magazine titles are subsets of another title, or where there are international variants of a magazine. Default is blank as most magazines don't need any filtering, just the name.
Example 1:
You want to download "Edge" The downloaders return...
Edge TruePDF-July 2016
Pacific Edge-April June 2016
Living Edge TruePDF-May 2016
In the reject list for Edge you would put Pacific, Living to prevent these being grabbed
Example 2:
You want to download GQ The downloaders return...
GQ May 2016
GQ India May 2016
GQ USA May 2016
British GQ May 2016
In the reject list you would put India, USA, British

If you want to download GQ India, or GQ USA, just put that as the title, no reject list needed.

If you know in advance which words you want to reject, you can pass them as part of the magazine name when you first add it on the "Magazines" page. Separate title and reject list by a tilde character. To add a new magazine including a reject list, for example 1 above you would put
Edge ~ Pacific, Living
into the box marked "Magazine Title" on the top right of the page, and hit the "+ Magazine" button.

In case you want to call the magazine "UK BBC Radio Times" in your database, but only search for "Radio Times"

Can be useful for filtering out badly named torrents. You can specify which date components must be in the download filename. Normally just leave this blank and we auto-detect.

To save and load your magazine filter settings if you need to rebuild your database or move to another machine.