We will try to keep some known workarounds issues documented here.

There are unresolved issues with lazylibrarians internal upgrade mechanism on freenas systems. If you have problems updating, a debug log of the upgrade process would be really helpful since I don't have a freenas to test on. A workaround for the problem is below (taken from the freenas forums)

Running as a Windows Service¶ 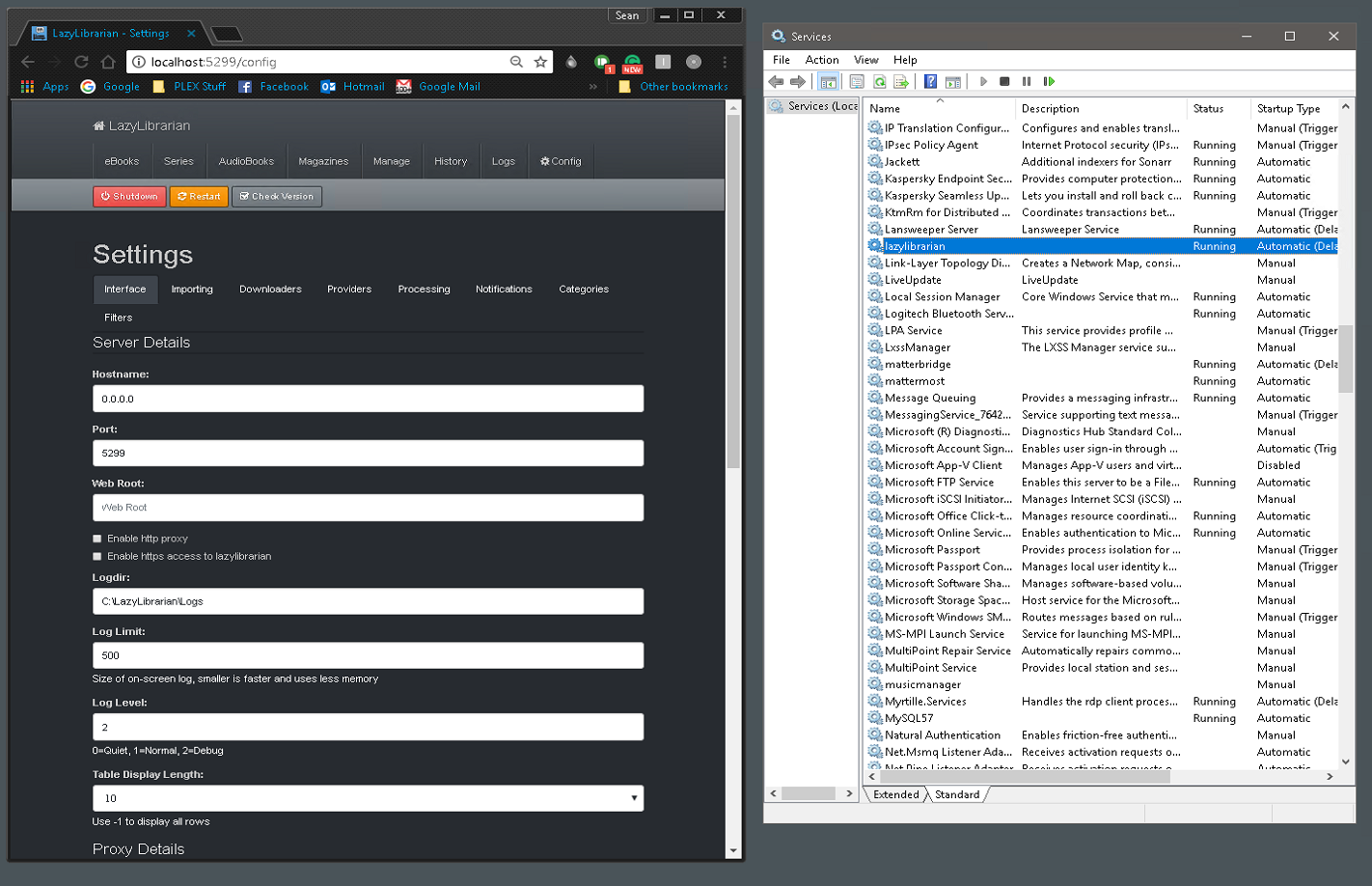 (Thanks to https://github.com/seanvree for the instructions)

If you get an error message "You must install pyOpenSSL to use HTTPS" Installing pyOpenSSL on it's own may not be enough. You may also need to install pycrypto, pyasn1, ndg-httpsclient. Seems some installations automatically pull these in when you install pyOpenSSL and some don't.

If you get the error message "SSL: SSLV3_ALERT_HANDSHAKE_FAILURE" when trying to load bookstrap themes The server you are trying to reach requires (SNI) Server Name Indication and will cause a handshake failure if the client is not using this SNI extension.. Support for SNI was only added with python 2.7.9

You may need to upgrade to a more recent version of python 2.7, and also make sure you have the additional modules mentioned in the previous answer (pycrypto, pyasn1, ndg-httpsclient)

If you get the error message SSLError("bad handshake: Error([('SSL routines', 'tls_process_server_certificate', 'certificate verify failed')]) your version of requests/cryptography is incomplete or outdated. Try pip install -U cryptography, pyopenssl, requests[security]

If you get ssl errors on goodreads sync you need to modify your ubuntu ssl settings, this is because ubuntu have decided to disable some older ssl features that goodreads still uses. There are several different workarounds...
1. Ask Goodreads to update their TLS to use TLS1.2 or later (good luck with that!)
2. Use the official SSL libraries from www.openssl.org or the debian packages which don't include the ubuntu restrictions
3. Downgrade the Ubuntu packages to the ones shipped with 19.10 which don't include the restrictions
4. Modify ubuntu ssl config to switch off the restrictions (works on 20.10 but not confirmed on 20.04)
The debian packages can be downloaded from
https://packages.debian.org/sid/openssl
https://packages.debian.org/sid/libssl1.1
Instructions on modifying the ubuntu config are here: https://discourse.ubuntu.com/t/default-to-tls-v1-2-in-all-tls-libraries-in-20-04-lts/12464

This library is used to detect filetypes where there is no extension on the filename (libgen does this sometimes). It's usually included in linux/mac installations, but if not, or if you are on windows see https://github.com/ahupp/python-magic for installation details

Many mac installations of python include an old version of TLS which is no longer supported by git (and pip and lots of other websites). This will stop lazylibrarian upgrading as we can't talk to git. LazyLibrarian will report the ssl and tls versions in the startup log, and in the config/system info popup. The problem is described here https://news.ycombinator.com/item?id=13539034 with some suggested workarounds. If someone with a mac has got it working, Let us know and we will update the documentation.

GoodReads has issued a notice that at some future date they will enforce https only access to their api, and at that point lazylibrarian will not be able to use their service without these ssl libraries.

Possibly applies to other systems with old or broken ghostscript or imagemagick or if you get a message in your lazylibrarian log saying
Command '['which', 'gs']' returned non-zero exit status 1
it means that "which" can't find "gs"

If you already have a working gs on your system, simply copy it into the lazylibrarian program folder (the folder containing LazyLibrarian.py)

If you don't have gs, or the system gs is too old
(this assumes your LazyLibrarian installation is in /volume1/@appstore/LazyLibrarian
If not, you will need to adjust the path in step 2, it should be the folder containing LazyLibrarian.py)

That way we don't disturb any of the other software on Synology that might want a different version of gs, we use our own private copy.

Possibly applies to dockers on other systems too.

If you want to chmod the files from the lazylibrarian docker please edit config.ini and change file permissions to 0o666 (default is 0o644) this is so that the calibre docker can read and write (delete) the files as it processes them.

If you want to use the aptalca docker for calibre, please set EDGE to 1 so it upgrades to latest calibre as the default version in that docker is quite old and seems to have issues talking to newer calibre versions.

If you have lazylibrarian in a docker and want to talk to calibre it is HIGHLY recommended that you use the linuxserver docker for lazylibrarian (link is on the lazylibrarian git page). This docker includes calibredb so you can talk to a remote calibre outside the docker, which can be calibre in another docker or a standalone calibre instance, possibly on a different machine.

Thanks to yongbi85 for the info

cbz magazines should just work. They are zipped collections of jpeg images. Lazylibrarian looks for page 000, or page -00, or cover.jpg This should cover most cases. If there is another common format that I haven't included, please let me know.

cbr is a little more difficult. These are rar archives, so we need an unrar library. You may already have one on your system (usually called unrar.dll or libunrar.so). Lazylibrarian does not include an unrar library as it is architecture dependant.

For Windows you can also download the already compiled library http://www.rarlab.com/rar/UnRARDLL.exe.

After upgrading to macOS Mojave 10.14.2 LazyLibrarian does not start when using LazyLibrarian.app. This is probably due to higher security implemented in Mojave.
The following error message is shown in a system popup:
"Not authorised to send Apple events to Finder (-1743)". With an "Edit" and a "OK" button.

Advice from another mac user (@sebrk): "I tried to recreate the script by simply copying the contents which upon execution asked if it could be allowed to message "Finder". I allowed it and it seemed to work. So the simple solution here is probably to recompile the script using Mojave"
If someone with access to Mojave and also an earlier version of macOS could try this and upload us a new version of the script that works on Mojave (and preferably also earlier versions) it would be really helpful as I don't have access to a mac.

Dockers are usually set up with english locale. If your host locale is not english you may need to add the following to your docker to get accented book titles and magazine names working properly.

For French locale use this for your docker env (change all locale accordingly):

and put this in your docker bashrc file :

Thanks to @foulou for the information